The Drifters at the Strawberry Festival 2022 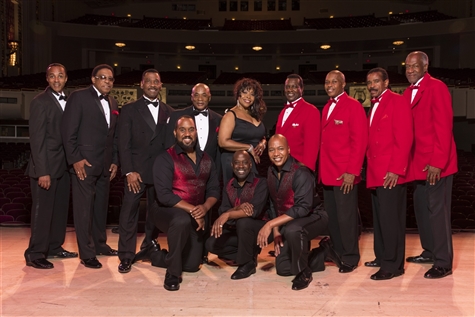 There’s a very good reason that Rolling Stone magazine, in their iconic issue “500 Greatest Rock and Roll Performers” said of the Drifters “No group has done it this well for this long–no one, not even the Rolling Stones.” That’s quite an accolade to live up to but hopefully, on their latest tour, the Drifters will once again prove Rolling Stone to be the sage of rock and roll. Through their historic journey which began in 1957, the Drifters have had no less than 5 legendary lead singers including Rock and Roll Hall of Famers Clyde McPhatter and Ben E. King. Such stalwart and famed individual lead singers as Charley Thomas, Bill Pinkney, and Johnny Moore have passed through the group over the years, each recording their share of Drifters hits. And today, as has been the case for nearly 25 years, their star lead singer is Jerome Jackson who also performed as the lead singer for the Main Ingredient in the 1970s. There are many “firsts” for the Drifters; they were the first group inducted into the Rock and Roll Hall of Fame along with fellow inductees The Rolling Stones, The Beatles, Bob Dylan, and the Supremes. Just reflect for a moment if you will, on that class of Rock and Roll stars that the Drifters were an integral part of. They were the first musical rock and roll group to include string instruments into rhythm and blues music with their hauntingly beautiful song, “There Goes My Baby”. They were the first musical group to sell two million records with their pop classic “Up on the Roof”. Their classic tune “Under the Boardwalk” is the most played R&B disc of all time.  They have sold over 200 million records across the world; a feat that has only been outdone by Michael Jackson, the Rolling Stones, and Adele. They were part of the longest-running sold-out concert show in Las Vegas history. For fifteen years, every night along with the Platters and the Cornell Gunther Coasters, sold-out first at the Sahara Hotel, then at the Hard Rock Café, and finally, at the Paris Hotel. No other show has come near that level of success anywhere. Their performance last year for President Bush Senior, at his 90th birthday party, was the sixth president that the Drifters have performed for over the last 35 years from the Inaugural Balls of President Reagan, Clinton, and Ford to President Nixon’s birthday party and President Obama’s daughter’s graduation–when history is made, the Drifters have been part of the celebration.

This is Florida's most popular festival held in Plant City, FL. Free entertainment, craft exhibits, pig races, concession stand and as always delicious Strawberry Shortcake. Featured concerts are listed by day & time (schedule is still TBA). Your package includes the bus transportation, admission to the festival and reserved concert seats. Our departure time from the festival will be 30 minutes after the end of each concert performance.