The Best of Quebec 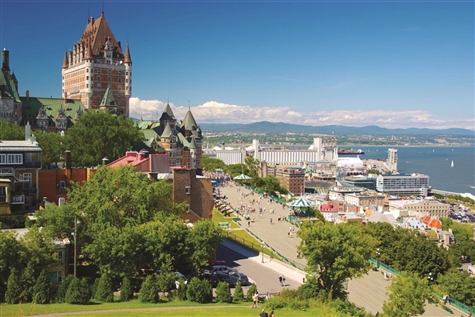 Known worldwide for its rich history and heritage, Quebec City is also a modern and dynamic city, filled with various attractions and fascinating discoveries for all visitors.

Known worldwide for its rich history and heritage, Quebec City is also a modern and dynamic city, filled with various attractions and fascinating discoveries for all visitors.  Quebec City has been a crossroads of cultures, peoples, and languages for centuries, resulting in a unique experience combining the best of Europe and North America into one metropolitan area. Québec City's Old Town (Vieux-Québec) is the only North American fortified city north of Mexico whose walls still exist, and it was declared a World Heritage Site by UNESCO in 1985 as the "Historic District of Old Quebec."!  This enthralling tour combines high quality accommodations with the opportunity to experience some of Quebec City’s finest historical and cultural sights.   Enjoy the luxury of the Hotel Manoir Victoria located in the heart of the city, from which we will travel to such locales as The Joan d’Arc Garden, Parliament, and the Montmorency Falls and more.  Come to Quebec City, and discover why this city has been attracting scores of visitors for the past 4oo years!

CUSTOMS: As of June 1, 2009 a US Passport or an enhanced driver’s license is required for border crossing.

*Please be advised that these are drop off/pick up zones ONLY. Parking for the duration of the tour is not permitted. We apologize for any inconvenience, however we must adhere to the policies set forth by Aviation & Wilton Mall authorities.

We will travel north to Canada and our accommodations for the next three nights in Old Quebec at the Hotel Manoir Victoria (418-692-1030). The hotel is walking distance from the major tourist attractions of Old-Quebec, such as Grande Allee, the Musee de la Civilisation, place D’Youville, the Plains of Abraham, the Petit-Champlain district and many others. Numerous surrounding restaurants offer great culinary experience and the opportunity to discover Quebec City’s gourmet specialties. All rooms feature hair dryers and free WiFi. The hotel also offers a beautiful heated outdoor swimming pool. Dinner tonight is the Side By Side Restaurant. You will have a choice of 1) Filet Mignon 2) Two Mustard Salmon or 3) Maple Chipotle BBQ Baby Back Ribs, and may give your order upon arrival. All entrees are served with rice & vegetables, and the meal also includes soup, dessert & beverage.

A full American breakfast is included each day at the hotel. Explore this vibrant city on a 3-hour Guided Tour with its fascinating history and provincial French flavor. Enjoy a relaxing drive through the only walled city north of Mexico which prompted UNESCO to declare it a World heritage Treasure. Some key sites on the tour are Chateau Frontenac, Place Royale, the Port of Quebec, Parliament and Notre Dame Basilica. There is a 50-minute portion of the tour that does require walking as some of the streets of Old Town are too narrow for the coach. Be sure to wear comfortable shoes. After the tour you will be free to explore Old Quebec at your own pace for the remainder of the day.

Enjoy your full breakfast at the hotel. This morning we will embark on the 4-hour St. Anne de Beaupre Tour, which is filled with intriguing stops throughout the city. Next, you will have time on your own to experience the world famous St. Anne Shrine, site of many miracles. At the Copper Studio, we will be introduced to the craft of copper repoussé and have the chance to view some of this spectacular work. Lunch is included at Manoir Montmorency at Montmorency Falls and your entrée choices are 1) Chicken breast with citrus and cardamom marmalade sauce or 2) Steamed salmon topped with dill and lemon white butter. Your meal also includes soup du jour, coffee or tea, and dessert. You will make your entrée choice upon arrival. Before/after lunch you will have time to view the majesty of Montmorency Falls, the first falls to be harnessed for hydro-electric power, and is one and a half times taller than Niagara Falls. We will then return to the hotel and the rest of the day you have to enjoy on your own.

A full breakfast is included at the hotel this morning. You will then have free time for a but more exploring before we depart for home. We’ll depart Quebec at 11am filled with fond memories of beautiful Quebec City. Our approximate arrival in the Capital District is 7pm. Two stops each way.

Please note: Quebec is a walking city with many steep hills and cobbled streets. Please be advised that moderate walking is required and comfortable shoes are a must!