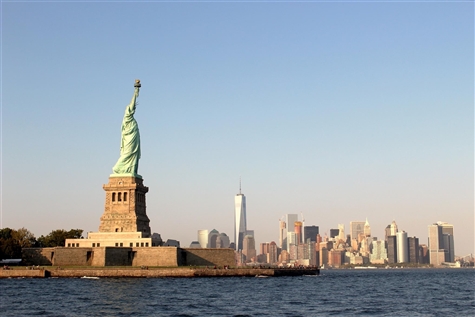 Take the ferry out of Liberty State Park to see Lady Liberty!

The Statue of Liberty Enlightening the World was a gift of friendship from the people of France to the United States and is a universal symbol of freedom and democracy.  One of the new wonders of the world, the statue can be viewed close up on Liberty Island.  Hop on the ferry to Ellis Island and relive the history of our ancestors as they first set foot on American soil. Ellis Island was America's largest and most active immigration station, where over 12 million immigrants were processed from 1892 to 1924.  Audio Tours of both attractions are available to you as well. There is also a gift shop and brand new museum on Liberty Island.  All tours will depart and return to Liberty State Park in New Jersey. Departure from Liberty State Park is at 5:30 PM with an approximate arrival in the Capital District at 9:30 PM. One stop on the return.

We'll depart at 5:30pm with an approximate arrival in the Capital District at 9:30pm. One stop on return

PLEASE NOTE:  Crown Access is NOT included in this tour.  Advanced reservations must be made for Crown Access on your own at least 3 months in advance.  Please follow the link in "Useful Links" above for more information.