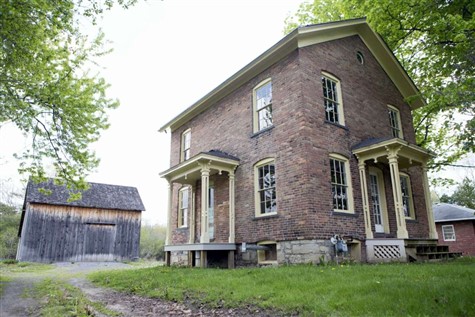 Join us on this ALL NEW TOUR to appreciate this historic community which supported Harriet Tubman in all of her endeavors!

This morning we will travel to "History’s Hometown" of Auburn, NY.  Our first stop will be at the Prison City Brewing Co. for lunch (included). Enjoy a buffet of flatbread pizzas including Margarita, Sausage & Apple and Mushroom Spinach and garden salad.  Soda/Iced Tea/Coffee and a small dessert are also included.  Next, we will visit the Harriet Tubman National Historic Park.  This complex encompasses the Harriet Tubman Visitor Center, the Tubman Home for the Aged, and the Harriet Tubman Residence.  Harriet Tubman was an escaped enslaved woman who became a "conductor" on the Underground Railroad, leading enslaved people to freedom before the Civil War, all while carrying a bounty on her head. But she was also a nurse, a Union spy and a women’s suffrage supporter. Tubman is one of the most recognized icons in American history and her legacy has inspired countless people from every race and background.  Next, we will visit the NYS Equal Rights Heritage Center which features a state-of-the-art exhibition titled “Seeing Equal Rights in NYS” where New York State’s progressive history supporting equality comes to life through interactive displays. Experience the creative ways New Yorkers organized to stand for justice, and learn about the key contributors from the 1800s to modern day.  Finally, we will head next door to the Seward House Museum.  William Seward was a New York State Senator, Governor of New York, a United States Senator, and served as Secretary of State in the Lincoln and Johnson administrations. He is credited with spearheading the purchase of the Alaskan Territory from Russia in 1867. As one of the only anti-slavery politicians in the 1840’s, he supported the rights of African Americans and remained morally opposed to slavery throughout his legal and political career.  We will depart at 5pm with an approximate arrival in the Capital District at 8pm. One stop each way.

Please Note: At this time tours of the Harriet Tubman National Historic Park are outdoors only and the interior of the buildings are currently closed.

We will depart at 5:00pm with an approximate arrival in the Capital District at 8:30pm. One stop each way.