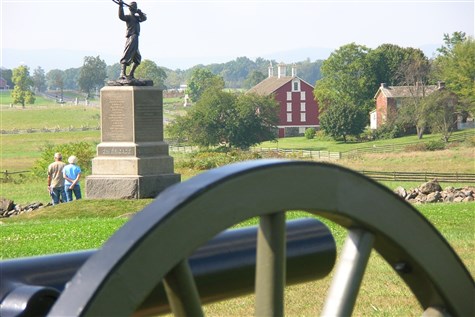 For over 100 years, Gettysburg, Pennsylvania, has been flooded by reports of paranormal activity. From phantom cries of wounded soldiers to life-like apparitions, many visitors to Gettysburg have been touched by its haunting past. Gettysburg was the site where Confederate and Union armies clashed on July 1, 1863. The battle was a three-day bloodbath that would change American history forever. When the cannon smoke cleared, the Union soldiers had won, but nearly 5,000 horses and 50,000 men lay dead or dying. Many of the Confederate soldiers never received a proper burial. Now, more the 14 decades later, these unsettled spirits may still linger in Gettysburg. This historic town is home to a surprising number of phantom forms captured in photography, including the ghost of what appears to be Confederate General Robert E. Lee.

We will depart the Capital District for Gettysburg,PA to hunt down ghosts and hear scary stories! We will make a stop along the way to have lunch on our own. Upon arrival we will be greeted by our local guide & then will tour the Jennie Wade House & Museum. Authentically furnished from cellar to attic, the Jennie Wade House is a shrine to Jennie and to life during the American Civil War. Just 20 years old at the time of the Battle, Jennie was kneading dough in the kitchen when a rifle bullet pierced two doors and claimed her life. Next it’s onto another Haunted Happening, a Ghostly Images Specialty Tour at the haunted orphanage. A paranormal author will speak to us within the depths of the orphanage, followed by a mini investigation. A paranormal investigator will begin discussing equipment, show us how it works and we will get to join in! Then enjoy a bit of free time before we dinner (included) at General Pickett’s Buffet after the tour. After dinner, we will check into our accommodations at the Courtyard by Marriott (800) 627-7468) and the rest of your night is free to relax after a day of traveling, touring & ghost hunting!

A delicious breakfast awaits us in the morning before we departt for the Gettysburg Heritage Center and see how civilians dealt with the wounded and the dead that were left behind in the aftermath of battle. Take a self guided tour and view a short movie. Next we will travel to the Gettyburg Tour Center to meet our Step on Guide for a 90 minute ghost tour of the haunted hillsides of Gettysburg. After our tour we savor a BBQ lunch at the Appalachian Brewing Company Restaurant with a Ghostly Images storyteller. We will return to the hotel to rest and relax or you can remain in Gettysburg and enjoy free time on your own to shop. We will return to town later this afternoon and dinner will be on your own. Next we're off on a 90 minute Haunted Walking Tour with a Ghost of Gettysburg guide that will walk you through the streets and hear about the spirits that never left. After the tour, you will return to the hotel.

After our breakfast (included) it's on to the Gettysburg National Cemetery to meet our licensed battlefiled who will walk and talk with us about the remarkable stories of the Civil War and its heroes and it's unfortunate victims. We will depart for home at 12 Noon with an approximate arrival in the Capital District at 7 PM. One stop each way.