Fall in Love With Michigan 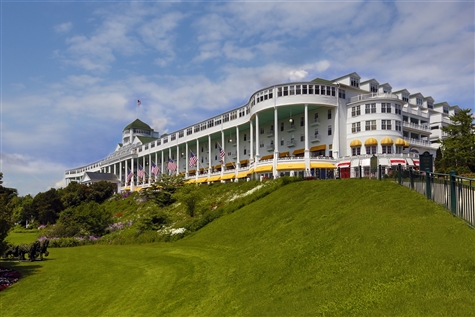 Travel with Lynn and explore all that Michigan has to offer!

Click the DEPARTURE DATES TAB to begin your reservation.

Travel with Lynn and explore all that Michigan has to offer.. Michigan has attracted visitors from around the globe for years with its natural wonders and boundless fascinating attractions. At the Grand Hotel on Mackinac Island, relax on the 660-foot front porch and view the swimming pool named after the actress Esther Williams. You can also look forward to accommodations in Thunder Bay, MI at the Thunder Bay Resort along with an elk viewing carriage ride & dinner. No tour to Michigan is complete without spending time in Frankenmuth, better known as Michigan's Little Bavaria. Experience a taste of German culture and cuisine right here in America’s Midwest. Visit the Henry Ford Museum, where you’ll learn about a pivotal time in our country’s history: the Industrial Revolution, tour the Rouge Factory & see the production line. Michigan has a lot to offer: so sign up today!

Don't Let Distance Deter You: If you live 50 or more miles from Yankee Trails in Rensselaer, WE’LL PAY for your hotel stay the night before departure!

We'll board the coach this morning with all of our fellow travelers and settle down to a pleasant ride to Buffalo, NY. Our first stop will be a tour of the Buffalo Transportation Pierce-Arrow Museum. We will visit their unique collection of automobiles that were once produced in Buffalo, often considered by car enthusiasts as one of the most unique in the world! We'll then continue on to Mentor, OH and our accommodations at the Holiday Inn Cleveland Northeast - Mentor (440-951-7333). A buffet style dinner is included at the hotel this evening featuring Parmesan Crusted Chicken with Sundried Tomato Cream Sauce, and Roasted Pork Loin in Honey Basil Glaze. Your meal also includes warm Rolls and Butter, Mixed Garden Greens Salad, Season Vegetable Medley and Buttermilk Whipped Potatoes. Following dinner the rest of your evening is free.

A full breakfast is included at the hotel before we leave this morning and travel to our accommodations for the night at The Thunder Bay Resort in Hillman, Michigan (989-742-4875). Upon arrival we will have time to relax and unwind. Later massive draft horses pull our deluxe covered carriages as guides fill the ride through the wooded resort with fun and interesting facts about Northern Michigan and the elk native to the area. Inside the 130 acre elk preserve you will get to see the majestic elk up close. Then it’s onto the Elk Antler Log Cabin for a five course dinner & wine tasting (included). Dinner includes: Pear & Apple Dumpling, Shrimp Cocktail, Jan’s Homemade Chicken Noodle Soup, Thunder Bay Sweet Napa Salad and Croissant, Crown Roast of Pork with Roasted Red Skin Potatoes, and White Chocolate Mousse Filled Pizzelles with Fresh Raspberries! After this amazing meal your evening is free.

A full breakfast is included this morning at the hotel before we depart for Rogers City where we will enjoy a delightful lunch at the Lighthouse Restaurant. After lunch we will meet up with a local guide for a 45 minute drive along the scenic Lake Huron shoreline. Next our guide will give us an outstanding talk to the Mackinac Bridge, Michigan’s Crown Jewel. At one time it was the longest suspension bridge in the world, we will find out where there are bigger bridges today and why the “Big Mac” may still be a greater engineering feat. Following our tour we will make our way to Mackinaw City where we will board a ferry to Mackinac Island. Since no cars are allowed on the island, horse-drawn carriages will take us to the Grand Hotel, an American Tradition since 1887 (906-847-3331). The Grand Hotel was constructed to help accommodate the already steady stream of summer visitors who wished to escape the severe heat of the cities and enjoy the cooler weather and natural beauty of the island. Glimmering like a diamond on an island of brilliant green, the Grand Hotel beckons you to a bygone era of old-world hospitality and charm, and is the Crown Jewel of pristine, secluded Mackinac Island. You will have free time upon our arrival and you can relax in one of the rocking chairs on the world's largest veranda (which is two football fields long!). You'll enjoy a five-course dinner (included) at the hotel tonight. Casual wear is appropriate throughout the day at the Grand Hotel, but in accordance with tradition, guests must wear formal attire after 6pm: jackets and ties for men and dresses or dressy pant suits for women are required.

A full breakfast is included at the hotel this morning. Next, we will be met by horse and carriage for a tour of the island ending at Fort Mackinac, where you will have time to explore. Constructed during the American Revolution, the Fort served as a sentinel in the Straits of Mackinac for 115 years. Today the original restored fort is a National Historic Landmark. The rest of the day is free for you to explore town or return to the hotel to enjoy the amenities. Tonight we will savor another five-course dinner (included) with formal attire in accordance with tradition. This evening there will be Ballroom dancing to the Grand Orchestra or you can relax and make the most of our last night on the island.

A full breakfast is included at the hotel this morning before our departure from the hotel. Once on the mainland, we'll continue on to Clare, where we will visit the Cops & Doughnuts - Clare City Bakery, that has been in constant operation since 1896. This foundation business was within weeks of closing when the members of the Clare Police Department came to the rescue. All of them, that’s right, all nine members of the local Police Department banded together to save this historic business. Dubbed “Cops and Doughnuts”, the business bakes handmade confections of all types. Savor a fresh baked doughnut and your choice of beverage while enjoying the Police decor and naturally, a gift shop. Our next stop will bring us to Frankenmuth also known as "Little Bavaria". Upon our arrival, we will visit Bronner's Christmas Wonderland; as seen on The Travel Channel, where you will have time on your own for shopping. It’s a shopper's dream with over 50,000 decorations and gifts. Bronner's is the size of 1 1/2 football fields. Our accommodations for tonight are at The Bavarian Lodge (989-652-7200). You will have time to freshen up before we savor dinner (included) at the Bavarian Inn Restaurant. Savor the chicken that put Frankenmuth on the map! Dive into a scrumptious Family-Style dinner including Kassler Rippchen (smoked pork loin), Sauerbraten (marinated roast beef), Jagerschnitzel (breaded pork cutlet), Bratwurst (pork sausage) and the famous Frankenmuth Chicken all with mashed potatoes, gravy and baked dressing as well as bread, soup, salads, veggies and dessert. Wear your stretchy clothes!

A full breakfast is included at the hotel this morning. Then we continue traveling south and you will visit the Henry Ford Museum, which began as Henry Ford's personal collection of historic objects, which he began collecting as far back as 1906. Today, the 12 acre site is primarily a collection of antique machinery, pop culture items, automobiles, locomotives, aircraft, and other items. You will find the Oscar Mayer Wienermobile, the 1961 Lincoln Continental, SS-100-X, that President John F. Kennedy was riding in when he was assassinated, the rocking chair from Ford's Theatre in which President Abraham Lincoln was sitting when he was shot, George Washington's camp bed, a ten-person safety bicycle made in 1896, Thomas Edison's alleged last breath in a sealed tube, the bus on which Rosa Parks refused to give up her seat, leading to the Montgomery Bus Boycott, & much more! Prior to the museum we will delight in the Rouge Factory tour and see the assembly line in action! You will also receive $10 in fun money that can be used for lunch today. Later this afternoon we’ll continue on to our accommodations at the Best Western Greenfield Inn (313-271-1600), in Allen Park, MI just minutes from Greenfield Village. You will have time to relax and unwind after we check in. Dinner is included at the hotel tonight, and your meal choices are 1) Broccoli Alfredo 2) Chicken Parmesan 3) Parmesan Whitefish or 4) 8oz Rib Eye Steak. All dinners include a house salad, vegetable, rolls & butter, beverage, & chef’s choice of dessert. Your evening is free.

A full breakfast is included at the hotel this morning. Then we are on our way to A Christmas Story House and Museum in Cleveland, Ohio. This house is restored to its movie splendor. We will also visit the Christmas Story Museum, which features original props, costumes, and memorabilia from the film. Next we will visit the Rock and Roll Hall of Fame and museum. The Museum celebrates the history and cultural significance of rock music and honors the contributions of those who have played an important role in the music’s creation and dissemination. We'll then continue on to Mentor, OH and our accommodations for the evening at the Holiday Inn Cleveland Northeast - Mentor. A Buffet Style dinner is included tonight at the restaurant featuring Chicken Marsala and Homemade Meatloaf. Your meal also includes warm Rolls and Butter, Mixed Garden Greens Salad, Season Vegetable Medley and Buttermilk Whipped Potatoes. Following dinner the rest of your evening is free.

A full breakfast is included at the hotel this morning. We will depart with many fond Michigan memories to share with our family when we arrive home! We will make a lunch stop, included at TBA, along the way. Our approximate arrival in the Capital District is 6pm. Stops will be made each way.

Protect your buck with our worry-free cancellation insurance for only $115pp/double. Call for details.

Please note: After July 1, 2022 some room and meal costs at the Grand Hotel will not be refundable, and are NOT covered by our tour protection policy. We apologize for any inconvenince but are held to the Grand's new policies.