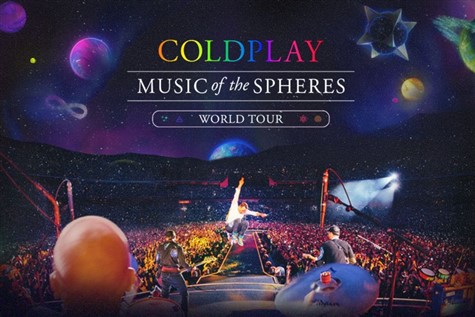 Join Yankee Trails at MetLife Stadium to see Coldplay and their Music of the Spheres World Tour!

In 2019, Coldplay announced they were taking a step back from touring because of the negative impact concerts have on the environment. Now in 2022, the popular British rock band is hitting the road again for a new, eco-friendly tour that started in Costa Rica on March 18.  The band has vowed to reduce carbon dioxide emissions by 50 percent compared to its 2016 tour and avoid fossil fuels wherever possible.

The concerts will be powered by solar tiles located on the stadium floor. The fans will also be playing a huge part in this new endeavor. With a kinetic floor, the concert-goers movement will be converted into energy. The option to ride electricity-generating bikes during the show will also be available to fans.

"I mean, the crowds are always giving us energy, and now they're literally giving it," Jonny Buckland, co-founder and guitarist of Coldplay, said.

The confetti at Coldplay concerts will now be 100 percent biodegradable, and fans are encouraged to bring reusable bottles to drink out of. In addition to all of these changes, fans who use low-carbon alternatives to get to a concert will be given a discount code.

Concerts typically produce a large carbon footprint and cause a massive amount of plastic waste. This led Coldplay to step back and look at how they themselves were impacting the environment.  "It's all very well to point fingers at other people, but we need to be doing our best now," Martin said. "And so it's been really interesting and exciting and extremely challenging, and we are still only about 50 percent there. You know, we have a long way to go, but we're trying."