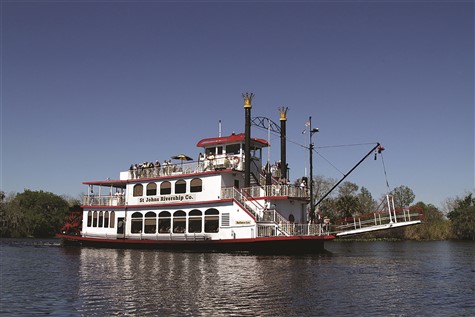 Join us and celebrate Thanksgiving aboard the Barbara Lee on Lake Monroe, in Sanford FL!

A century ago, the St. Johns River was Florida's first great inland highway connecting the ocean port of Jacksonville with the still-wild interior. The Rivership Barbara-Lee takes you back to a more adventurous, more romantic time.  From its home port on Lake Monroe in charming downtown Sanford, FL (just North of Orlando), the Barbara-Lee cruises the St. Johns, serving up superior food, live music and dancing. You'll also get close-up views of the area's abundant wildlife. You'll see prolific bird life — majestic great herons, "snakebirds," osprey, eagles ­— plus turtles and alligators lazing along the banks. During the cooler months manatees are often spotted as they move in from the ocean to bask in the warmer river water and snack on water hyacinths.  The food aboard the Barbara-Lee is cooked fresh in the ship's kitchen and today we'll savor a traditional Thanksgiving Dinner with all the trimmings!

We will depart at 3pm with an approximate arrival in The Villages at 5:00pm. Non-stop each way.

Due to current CDC Orders, masks are required on all public transportation including trains, planes and buses.  Unless actively eating or drinking, proper face coverings must be worn at all times regardless of vaccination status.